ER Editor: Please note that the source of this story is the World Socialist Website and, like ER, supports effective, at-cost universal healthcare traditionally represented by Britain’s NHS. While we agree that neither of the main UK parties will adequately defend public healthcare, we do not endorse the Socialist Equality Party, however.

Labour’s pose as defender of the National Health Service exposed

The crisis facing the National Health Service (NHS) has dominated the closing stages of the general election campaign. Starved of funds for a decade under two Conservative-led governments, research by the Patient Association published by the Guardian found that 5,500 NHS patients have died over the past three years due to spending so long on a trolley in overcrowded hospital Accident and Emergency units.

Much of the NHS is now in the hands of private sector, as depicted in John Pilger’s new film, The Dirty War on the National Health Service.

Labour’s claim to be the only party that will defend the NHS is the main reason many support the party. But like most of its main pledges, this too is without genuine substance.

The most devastating rebuttal of Labour leader Jeremy Corbyn’s rhetoric about there being just days to “save the NHS” by electing a Labour government was provided by his Shadow Health Secretary Jon Ashworth (pictured further below). 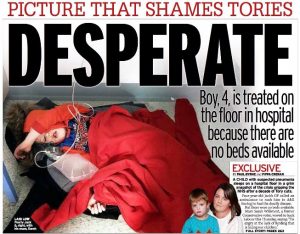 On Monday, a news report went viral of Conservative Party leader Boris Johnson refusing to look at a photo—after being asked to by an ITV reporter—of a four-year-old boy suspected of having pneumonia lying on the floor of Leeds General Infirmary for the lack of a bed (pictured).

Ashworth was dispatched by Corbyn Tuesday morning to promote Labour’s NHS policies in the media and explain that the photo episode sums up the Tories’ callous attitude to the NHS, after a decade of austerity cuts that have brought it to the brink of collapse.

But this gave the Tory blog, Guido Fawkes, the opportunity to leak a recent phone conversation between Ashworth and one of his Tory friends, Greig Baker. Baker is a former chair of the Canterbury Conservative Association and chief executive of the GUIDE Consultancy, which “helps companies affected by political change,” by providing a “political and commercial intelligence service.”

During the call, Ashworth is heard repeatedly denouncing Corbyn and insisting that under him Labour cannot win the election. He states of the Blairite coup against Corbyn in 2016: “We f***ed it up in 2016 when we went too early. People like me were internally saying this isn’t the right moment, but I got ignored. We went too early, so now I’m afraid.” 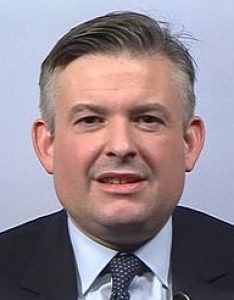 Ashworth went on to tell Baker—ominously in light of threats by senior military figures to organise a “mutiny” against a Corbyn government—that the civil service would have to “safeguard security” if Corbyn enters Downing Street Friday.

Asked by Baker, “If it works out alright and I assume we both hope and there is some sort of workable majority for Johnson, how long do you reckon it will take Labour to get its act back together and get rid of Corbyn? We talked about this before, haven‘t we? ” (emphasis added).

Ashworth replies that moves are underway, saying, “Well that is the thing that a lot of us are … It is on our minds.” He reassures Baker, “I think things can change quickly. I think things change more quickly generally now … I think things are more fluid.”

This is the Blairite scoundrel that is to be placed in charge of the NHS by Corbyn if he wins office tomorrow! Ashworth is just one of the many right-wing MPs that Corbyn has worked cheek by jowl with as leader for years. He began working for the Labour Party in 2001 as a Political Research Officer and within three years was a close adviser to Blair’s chancellor, Gordon Brown. When Brown took over from Blair as prime minister in 2007, Ashworth was appointed deputy political secretary, specifically to liaise with the trade unions.

The NHS can never be defended by these anti-working class forces, who are conspiring with the Tories to ensure a Johnson victory, while being shielded by Corbyn in the name of “party unity.”

Moreover, even if Corbyn did succeed in implementing his policies in government, they would not even scratch the surface of the crisis facing UK healthcare. Some policies would even make things worse.

Corbyn’s foreword to the manifesto on defending the NHS promises, “Labour will give the NHS the funding it needs, end privatisation, and never let our health service be up for grabs in any trade negotiation.”

But Labour offers only the most minimal cash injection for the NHS—even less than the right-wing Blair government and barely more than the Tories!

Labour “will invest in the NHS to give patients the modern, well-resourced services they need,” the document states, but this translates to only “increase expenditure across the health sector by an average 4.3% a year.”

This headline figure includes Social Care spending, with the Institute for Fiscal Studies (IFS) noting that under Labour’s plans, NHS spending in England will increase by just 3.8 percent in real terms.

Labour’s NHS spending pledge is a reduction on what was pledged last June, when Ashworth said Labour would “top up NHS spending growth to around the 5 percent which is needed.”

Since then, more than £20 billion has been slashed from the NHS in “efficiency savings” by the last two Tory governments. Nowhere in Corbyn’s manifesto is this mentioned, let alone any pledge made to reverse it.

The manifesto notes that the NHS requires 100,000 more staff, including 43,000 nurses, and that social care staff numbers are down by 120,000. But it makes no pledge to recruit the massive numbers of staff desperately needed and halt the jobs cull.

In addition, Labour’s manifesto pledges that if Britain leaves the EU, freedom of movement for EU citizens “will be subject to negotiations,” i.e., ended. Its immigration policy will be based on a “work visa system” that “must fill any skills or labour shortages that arise.” But this policy would have devastating consequences for the NHS, when 65,000 NHS employees in England are EU nationals (5.5 percent of all staff). Moreover, 13.1 percent of NHS staff list their nationality as non-British.

The Health Foundation warned last month of a “growing workforce crisis that threatens patient care, with 1 in 8 nursing posts vacant across the NHS.” It stated that “international recruitment is the only way to fill the gaps—we will need at least 5,000 nurses from other countries each year for the next 5 years.”

Labour has outlined vague plans to reduce the working week to 32 hours (a four-day week) over the next decade. This was to include the 1 million workers employed in the NHS. On Tuesday, however, Labour leader Jeremy Corbyn declared, “The whole point is that, over a period, increases in productivity will lead to lower working time hours, but it’s not going to be forced on the NHS.” He added that a reduction in hours for any group of workers under Labour would be funded “through productivity in all industries and places of work.”

Labour’s manifesto promises to abolish the Tories’ 2012 Health and Social Care Act, which accelerated the privatisation agenda imposed by successive Labour and Tory governments and removed the duty of the health secretary to provide a universal healthcare system in England. It adds, “[W]e will end the requirement on health authorities to put services out to competitive tender.”

This cannot be taken at face value. An identical pledge to scrap the Act was contained in Labour’s 2017 manifesto. But just days prior to the 2017 election, Ashworth himself clarified that Labour would only partially repeal the Act. As noted by the Health Care Times, Labour would only remove the Act’s Section 75 regulations, used to enforce competition and tendering on a compulsory basis, through the regulator, Monitor. Ashworth insisted that “there has always been a private element of health provision in this country.”

The NHS will not be defended by any of the parties of big business, including Labour. The social right to healthcare can only be defended on the basis of the independent initiative of the working class and the fight for a workers’ government. This is the programme of the Socialist Equality Party and its NHS FightBack initiative. 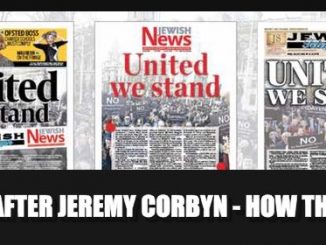 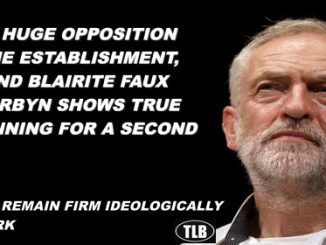 Keep Left, Jeremy Corbyn, It’s the Key to Your Success