While the Trump administration’s decision to end the Intermediate Range Nuclear (INF) treaty has certainly sent the world into a ‘strategic shock’, the biggest shock is certainly in Europe, which was always the primary beneficiary of this treaty. It had seen hundreds of missiles removed from its soil and also those pointed towards it, changing the continent’s security environment considerably as this treaty marked a major benchmark in terms of ending the Cold War as well. Now, the end of this treaty means that Europe has once again become vulnerable to a nuclear showdown between Russia and the US any time in future. This vulnerability certainly requires some crucial decision. Therefore, an important question is: how will Europe adjust to this new strategic reality?

For now, there is clearly a divide in Europe over how it sees US withdrawal. While the UK has announced that they ‘stand’ with Trump, Germany sees this development differently and its statement expresses regret about the US decision to abandon “an important element of arms control that especially serves European interests.” In the absence of robust missile programs, therefore, will the US ‘force’ countries like Germany, whom Trump has already accused of not contributing their due share to NATO, to place US made weapons in Europe? In such a scenario, we might see another rupture in US-EU relations since the mood in Europe isn’t really ‘favourable’ towards Trump, and the possible deployment of US weapons in Europe today will most probably be seen as ‘over-dependence’ on the US than as a reflection of true strategic alliance.

On top of it is the fact that no European leader, unlike the US presidents, has ever publicly criticised the Russians for any violation of the INF treaty, a fact that will make it difficult for EU countries to simply subscribe to the US version of things and frame policies accordingly. Also, the fact that EU and the US have developed differences over a number of crucial issues stands to make an impact on what the EU does in the post-INF scenario.

An important question in this context is also that of EU’s own relations with Russia. Undoubtedly, EU’s relations with Russia are fundamentally different from what these relations were like during the Cold War. Today, we have far-right governments in Hungary and Italy, which are not trembling at Russia’s rise as a major US counterpart but are instead asking for a removal of sanctions on Russia in order for them to pursue trade.

And, similarly, the EU is in the middle of re-writing its relations with Russia in a big way. Its latest manifestation came in the form of the presence of EU’s two major countries, Germany and France, in 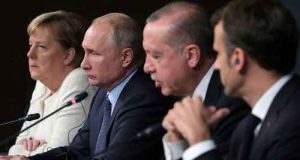 While this summit has been downplayed by the western mainstream media, it does imply important things taking place. If nothing else, this certainly means that EU is adjusting itself into Astana and Sochi processes even when the US continues to stay out of it. This summit, if nothing else, also underpins the new Eurasian reality coming into existence, wherein Europe and Asia will be interacting in altogether a different geo-political landscape than was the case during the Cold War.

And yet, this is perhaps the most important and yet least underpinned reason for the Trump administration’s decision to withdraw from the treaty. By allowing a Cold War-like strategic scenario to return to haunt Europe, the US is hoping to bring Europe back to the US fold. Already the US has forced Germany into buying US LNG. Will the US do the same with regard to forcing Europe to ‘buy’ US missile systems? This might not as simple as it looks.

As such, while Europe had simply agreed to the deployment of hundreds of US missiles almost 35 years ago, it doesn’t seem willing to do that again. German response to the US withdrawal shows that their government is in no mood to have another movement and protests, the kind of which it had to face after 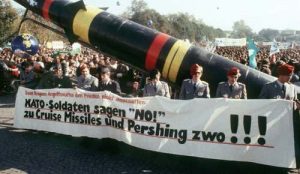 the deployment of Pershing II missiles when hundreds of thousands of people, led by the widely respected former Chancellor Willy Brandt, demonstrated against the Pershings (see image). Protest movements also arose elsewhere in Europe, where the US was deploying cruise missiles. Therefore, an interesting additional question for the US administration is: even if the US can readily develop INF missiles, where will it deploy them, in the wake of an unwilling Europe, to ‘deter Russia into supposed submission’?

And if the US cannot bring Europe back into the fold, i.e. force it to reverse the current trajectory of its relations with Russia, what will be the use of withdrawal except that it will open the way for the development of new missile systems, thus keeping the US military industrial complex running? But the question of who will buy these systems if not Europe remains open.

While the US might want to engage its Asian allies by selling the ‘fear’ of Chinese expansionism and threat, Europe would perhaps still remain out of the fold not only because of their mutual differences and cleavages over issues like the Iran nuke-deal, but also because the US, despite its allegations, has been unable to really convince Europe of how Russia did what the US thinks it did: treaty violation, as no European has really accused Russia of such violations.

The End of NATO? Macron Laments ‘Brain Death’ and Pushes for a European Military 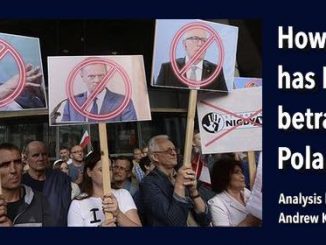 The West Proves That Poland’s Loyalty Has Been Worthless