ER Editor: We also link to two pieces we recently ran titled How the UN Refugee Program is Undermining our State & National Sovereignty [VIDEO], and Hundreds of French-speaking Migrants from Africa Land in San Antonio TX.

With African illegal aliens now crossing the border illegally with thousands of Central Americans, border agents are worried about being infected with the Ebola virus. And with good reason. Up and down the border, officials have told the Washington Examiner, agents are reporting to work ill because of the prolonged and constant contact with sick and diseased aliens.

Mumps, measles, scabies, the flu, and strep throat, along with the possibility of typhus, are bad enough. But Ebola, the African killer virus that causes a fatal hemorrhagic fever, is a terrifying possibility given that some of the Africans are from the Democratic Republic of Congo.

That benighted nation in the center of the Dark Continent is dealing with an outbreak of the Ebola Virus Disease that has killed nearly 1,500 people.

Border Officials: Agents Are Getting Sick

In a dispatch from Eagle Pass, Texas, the Examiner reported yesterday that agents are worried about Ebola, “but more of them are worried about other illnesses frequently popping up among detainees at stations across the southern border, according to union representatives.”

The illegals are bringing in myriad diseases and infecting the agents, the newspaper reported. Jon Anfinsen, a National Border Patrol Council vice president and based in Del Rio, told the Examiner that agents are exposed to an “unprecedented” number of diseases.

“Scabies, chickenpox — we had one case of the mumps here in Uvalde. I wanna say we had measles — plenty of the flu, plenty of colds, body lice, just assorted. And some of these things, they spread like wildfires when you get into a cramped holding cell. It happens,” he told the Examiner.

“We have a lot of agents who are sick,” he told the newspaper. “The other day I talked to agents from four different stations. And every single one of them had a cough.”

Anfinsen too picked up a bug from the infected and contagious invaders:

“I’ll go and I’ll help process. There was one day I spent processing and we had like 40 Guatemalans and Hondurans, and most of them had some kind of cough. And sure enough the next day, I’m sick — for a week,” he said. “It’s become the new normal, and you gotta just keep going and do your job because you can’t just not process them.”

Another agent and border union official, Wesley Farris, told the Examiner that the illnesses are hitting the border in breakouts that come in “waves.”

“It’ll go in waves. Scabies — strep throat was the last one. Strep throat happened at the Santa Teresa station [in New Mexico]. It was everywhere,” Farris said. “Active tuberculosis comes in fairly regularly. We had an incident of H1N1, swine flu, in Clint [Texas] with a juvenile. And then the ones that are most disruptive are the simple ones: regular flu or lice.”

Scabies is an infection of the skin from itch mites, while lice are a particular threat because they carry typhus, a flu-like disease caused by the bacterium Rickettsia prowazekii, but that threat is minor compared to the much more deadly Ebola Virus Disease.

Farris wants the Centers for Disease Control to send help to the border given that it is trying to help fight the outbreak of EVD in the DRC.

The EVD threat comes from what the Associated Press, reprising a report from Breitbart, calls a record number of Africans hitting the border.

“One recent Saturday in Tijuana, there were 90 Cameroonians lined up to get on a waiting list to request asylum that has swelled to about 7,500 names,” AP reported. “Also on the waiting list are Ethiopians, Eritreans, Mauritanians, Sudanese and Congolese.”

The Cameroonians, AP reported, are flying to Ecuador, then traveling north through Panama and Central America to get to the southwest border.

Border agents have apprehended more than 500 Africans at the border, more than double the number, AP reported, from last year.

Once inside the U.S., border officials dumped them in San Antonio, The New American reported last week. From there, AP reported, they were bused to Portland, Maine, which has dealt with a horde of Somali “refugees” the government settled there in the 1990s, AP noted.

Where they’re settled aside, the main concern now is Ebola.

The World Health Organization’s latest situation report says the outbreak that began in August last year has sickened at least 2,054 people, and killed more than half of them, 1,440.

How They Do It: French Police Assisting People Smugglers into UK 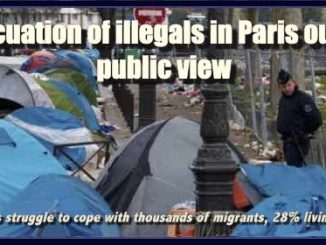